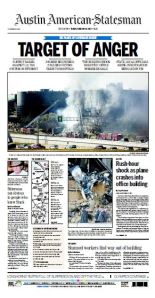 Pilot Andrew Joseph Stack flew a plane into an IRS office building in north Austin. I wrote the headline "TARGET OF ANGER." 2-19-2010

I was at my desk in the newsroom when we heard midmorning that a plane had just crashed into a building in an office complex in north Austin.

As more details came to light, it was clear that this was more than an accident and that the next day’s paper would be devoted to the story.

I began making plans to handle the increased editing, design and production tasks.

I called in staffers from their days off, re-arranged assignments, added designers and outlined internal deadlines for the extra pages, photos, graphics and stories that we would be handling  before the 11 p.m. deadline.

Throughout the day – and night – I collaborated with content editors, photographers, artists, production departments and others to ensure that our plan was solid.

Fourteen hours later, we released the last page for the Feb. 19 edition and I got ready to go home.

Whew. A long day but solidly satisfied in a job well done. Later the report was awarded a top journalism prize by the Headliners Foundation of Texas. Read the judge’s comments here.

This Statesman article by former social media editor Robert Quigley describes the scene in the newsroom as the story unfolded. It may not shed much light on my role, but I think his observations about social media are important.